Who Were the Trailblazing Porter Sisters,
​Who Paved the Way for Austen and the Brontës? 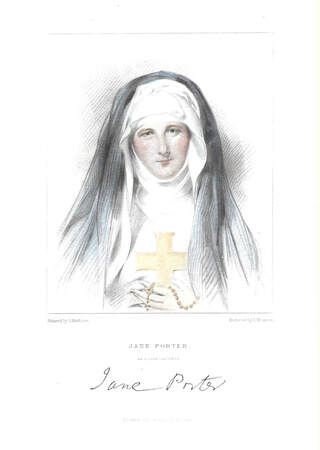 Jane Porter as a "Lady Canoness." She was not a nun, although her quiet reserve and love of veils sometimes resulted in her being mistaken for one. This portrait shows her with the gold cross of the European chivalric order she'd been elected to, in recognition of her contributions to literature.
The Porter sisters were among the most famous British novelists of the nineteenth century, although few today have ever heard of them. During the decades that Jane Austen's posthumous fame was slowly rising—transforming her into an international icon—the Porter sisters' once-great celebrity was just as gradually fading.

That fall from view is a grave injustice. Jane and Anna Maria Porter published 26 books, separately and together, over the course of their decades-long careers. At Jane Porter's death in 1850, the International Weekly Miscellany called her "one of the most distinguished novelists which England has produced." It then declared,  "Miss Porter may be said to have been the first who introduced that beautiful kind of fiction, the historical romance." 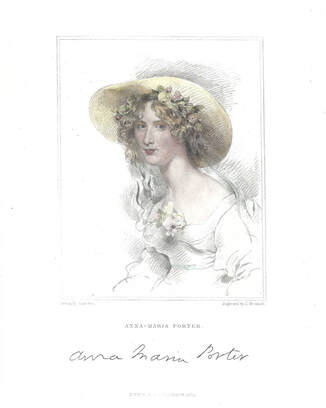 Anna Maria Porter (called Maria and pronounced "Mariah") was a gifted writer whose prolific output helped keep her chronically indebted family financially afloat.
That line, too, may come as a surprise. Sir Walter Scott is often credited with having invented the historical novel, with his best-sellingWaverley (1814). In fact, Jane Porter (who knew Scott as a girl) got there almost a dozen years before him, with Thaddeus of Warsaw (1803), itself a runaway success. Then her sister Maria published The Hungarian Brothers (1807) in the same mode, to further acclaim. A persuasive case may be made that the Porter sisters pioneered the method for creating the modern historical novel.

But what literary history may yet decide is that Jane and Maria deserve to be remembered for their remarkable, vast private correspondence, just as much as for this innovation in historical fiction. Their achingly honest letters describe their childhood poverty, voracious reading, and ambitions for developing their genius and gaining fame. They narrate the pains and pleasures of female authorship, confess their frustrations with three brothers' foolish debts, and reveal scandalously dramatic affairs of the heart with attractive but flawed men. It's from these still-unpublished thousands of family letters that Sister Novelists pieces together the puzzle of the Porters' lives and careers, in the first full-length biography of two female geniuses who've long deserved to be returned to a prominent place in literary history.